Will more people consider moving abroad now they can work from home? 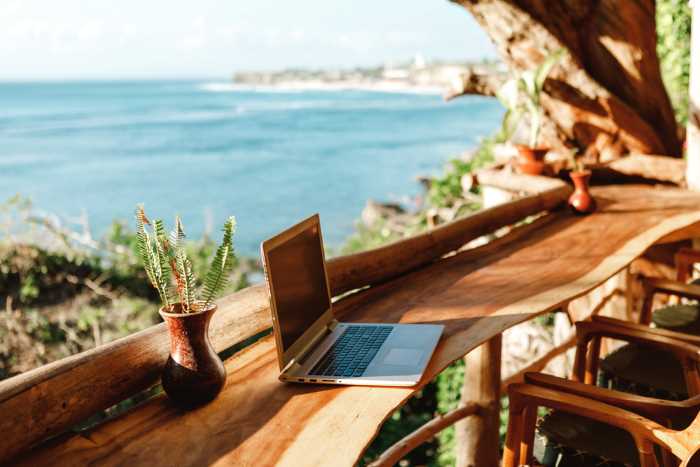 'Wherever I lay my laptop, that's my home', as Paul Young so nearly sung. Christopher Nye, senior content editor at overseas homes and relocation website Property Guides suggests that the world is your oyster as a digital nomad.

September 29 2020 - The government urging offices to tell us to work from home for the next six months will have been the last nail in the coffin for some of our city centre businesses. However, it also opens a world of possibilities for staff now freed from the commute.

Many of us are able to expand our horizons and will grasp the opportunity. When Property Guides asked readers if the pandemic had made it more or less likely they would go abroad, 31% said more likely and only 6% said less likely.

The benefits of remote working

I would highlight three benefits of working from home as an expatriate. The first is simply the thrill of it all. To really get to know a new country, and maybe learn the language too, in a more relaxed way over the course of a year or two.

Secondly, you can save a lot of money living abroad too. Housing in the UK - especially London and the South-east - is so expensive that homeowners can rent out their British home for roughly 35% more than they'll be paying out in rent in countries like Spain and Portugal, using the difference to subsidise their lifestyle there.

The negatives of remote working

There are downsides too. Be very careful that you can get a good internet signal! Many countries have better internet coverage than the UK, but just like here, coverage can be patchy.

Beware time zones. Previously close office-based teams are already feeling isolated geographically, adding opposing time zones to that can feel very lonely - and getting those Teams notifications all through the night might not be ideal!

Where, then to go? Covid and Brexit are the two major limitations for the time being, but let's imagine a world after the worst of Covid, when borders have reopened but we can still work from home.

British people have got used to being able to work where they like in Europe, so Brexit could be a shock to anyone looking for bar work in Magaluf next summer. But if you're just sitting at your laptop, who is to know who you're working for?

Certainly, some people will get away with working illegally for a while, just as many international homeowners get away with operating Airbnbs illegally. But it's a dangerous game. Your passport will be stamped at the airport. If not paying tax you won't be entitled to state healthcare or social security. You could be deported and banned for life.

Some countries, however, have seen the benefits that digital nomads bring and are issuing special visas. Estonia is one. This small but charming Baltic country launched its Digital Nomad Visa this summer, allowing you to work for an employer or yourself for up to a year. For the visa you have to show a gross monthly income over €3,500.

Our fellow non-EU state Norway has a digital nomad visa too. The positive thing is that you can stay there as long as you like. The only catch is that it only applies in Svalbard, an archipelago half-way to the North Pole.

With the best will in the world, not everyone wants to relocate to chilly Estonia or frozen Svalbard. So where else offers such visas? Barbados and Bermuda could hardly be less like Estonia but both also lay down the welcome mat.

Barbados's Welcome Stamp allows a year's stay on payment of a $2,000 application fee ($3,000 for a family) but you'll soon save that on the tax that you won't have to pay there. Bermuda has a similar year-long programme which is also open to students.

Mexico tends to get a bad press but, if you avoid the drug areas, is one of the world's most beautiful and liveable countries, with the friendliest people. A tourist visa will last you six months in Mexico, but you can also apply for a temporary resident visa for up to four years. You apply at the consulate or embassy in the UK and have to show a minimum wage of around US$1,500 per month and/or a bank account or investments with some $22,000 over the past year.

Back in Europe, one popular choice is Portugal, which also offers a year on its self-employment visa. While the Algarve might be famous for retired expats playing golf in the sun all winter - lucky them - its two biggest cities Lisbon and Porto have both become high-tech hubs. Lisbon hold some of the largest technology conferences in the world and has digital nomads flocking to its trendiest neighbourhoods.

There really is a world of opportunity out there when you're WFH.